WHAT IS THE PANASONIC HC-V770?

If you don’t foresee your shooting shifting to the higher resolution anytime soon, however, the HC-V770 could be all you need. It’s considerably cheaper than the 4K models, and there are still plenty of high-end features on offer.

The HC-V770 is based around the same 1/2.3in back-illuminated CMOS with 12.76 megapixels as last year’s HC-W850, which is large by camcorder standards but small compared to a DSLR. Only 6.03 megapixels are used for video or photos, but that’s about three times what’s required for Full HD. Panasonic harnesses the extra resolution for the Intelligent Zoom, which raises the 20x optical zoom to 50x.

The extra sensor resolution is also employed for the Hybrid Optical Image Stabilisation, which combines conventional OIS with in-body sensor stabilisation. This means it can compensate for horizontal, vertical, and rotational movement along the axis, as well as vertically and horizontally. In our experience, this combination of techniques is about the most effective in the business.

As we’ve already explained, the HC-V770 doesn’t shoot 4K. The top resolution is 1080p Full HD, running at 50 progressive frames a second. This records at 28Mbits/sec in AVCHD mode and 50Mbits/sec in MP4 mode. The MP4 option also provides the facility to shoot 720p and iFrame, which uses a 960 x 540 resolution (one quarter Full HD) at 25 progressive frames a second and 28Mbits/sec data rate. This has the least aggressive compression of all.

A Full HD slow-motion option is available too, which records at 100fps. Panasonic’s Crystal Engine video processor then interpolates this up to 200fps – twice that of previous models – before playing it back at 50fps. You can turn this in on permanently, or merely provide the facility to engage it via an onscreen button. Pressing this turns off the microphone and switches to slow motion before you release it.

Despite the sub-£500 price, the HC-V770 still includes a full range of Wi-Fi capabilities. You can remotely control the camcorder, use it as a baby monitor or a surveillance camera, make the HC-V770 into a DLNA-compatible media-storage source, and even stream live online via the USTREAM service.

Also new with this generation is the Wireless Twin Camera option, found in the Wi-Fi menu. Selecting this guides you through connecting your smartphone, after which the Panasonic Image App switches to Twin Camera mode. Video from your smartphone’s front or back camera is then streamed into the camcorder, and placed as a picture-in-picture within the main frame.

This will also work with another model of Panasonic camera that has Wi-Fi connectivity. It worked well during testing, and we think this is more useful than the built-in secondary camera of higher-end Panasonic models, because the main camera and Twin Camera can be directed entirely independently.

The chassis design of the HC-V770 is virtually identical to the HC-W850, except that it’s missing the secondary camera that’s also a feature in the new HC-WX970. It’s a cute addition, but hardly essential to the core function of shooting video. Its omission has helped to keep down the price to sub-£500 levels, but also leaves a large expanse of plastic on the outer edge of the flip-out LCD panel.

The HC-V770 is actually quite pleasant to hold when you’re shooting double-handed. As is the norm these days, the majority of functions are controlled via the touchscreen LCD. But there’s also a separate function dial near the lens, which can be used to quickly access manual settings. For tasks such as focus pulling, it isn’t quite as easy to use compared to a lens ring, but it’s effective for controlling the full range of options. 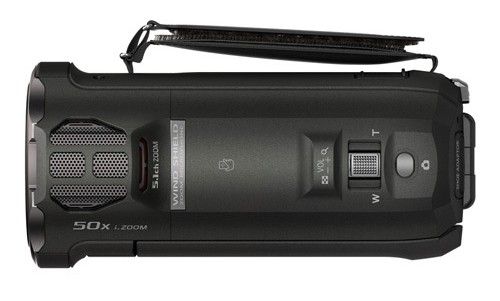 Shutter speeds range from 1/25 (auto slow shutter on) or 1/50 (auto slow shutter off) to 1/8000th, and iris ranges from F1.8 with the lens fully wide or F3.6 when zoomed in to F16. All of these can be adjusted independently, and up to 18dB of video gain can be added to a fully open shutter.

The picture adjustments consist of sharpness, colour and white balance bias, with a general exposure control only accessible if the iris and shutter haven’t been configured manually. Even in Intelligent Auto mode a few picture adjustments are available, although in this case they must be accessed via the touchscreen, because pressing the dial will switch to manual.

Alongside the Manual, Intelligent Auto, and Intelligent Auto Plus modes, there’s a special-effects section containing Miniature Effect, 8mm Movie, Silent Movie, and Time Lapse, with intervals ranging from one second to 2 minutes.

The aforementioned Slow Motion has its own separate section too, and there are 11 scene modes on offer in a further section. Finally, HDR mode is a development of Intelligent Contrast, bringing out the details in shadowed subjects without having to bump the whole brightness up with backlight compensation. So the HC-V770 is truly packed with settings to play with. 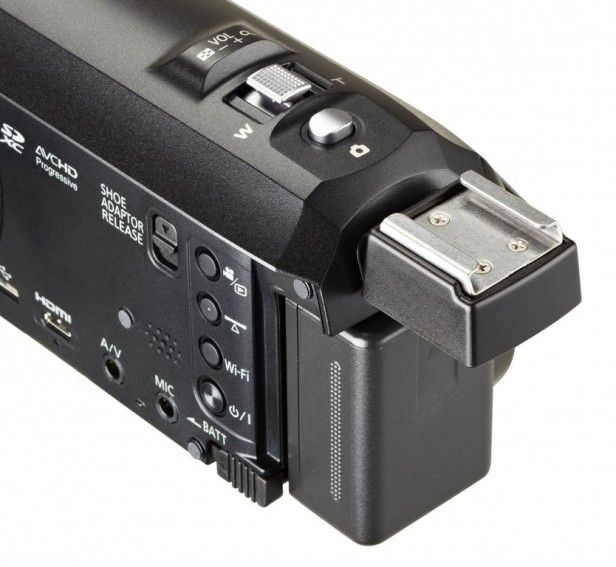 Although the HC-V770 doesn’t have an accessory shoe on the chassis itself, there’s a slot in the rear for an adapter. An adapter is included in the box, and it slides in to provide this facility when required.

There’s a multi-microphone array at the front of the camcorder that allows it to record 5.1 surround sound, but if you want to use an external microphone on the accessory shoe or a wireless microphone, there’s a stereo mini-jack under the LCD panel. Another mini-jack by the lens provides headphone connectivity, so you can monitor audio quality and levels.

We’ve been consistently impressed by the image quality afforded by Panasonic’s high-end camcorders. The HC-V770 doesn’t move on from last year’s top Full HD models such as the HC-W850 in this respect, but it already offered excellent performance. Colours are rich and realistic in good lighting, with plenty of fine detail.

These qualities are maintained well as illumination is lowered, with the HC-V770 showing no signs of struggle when picking up a bright picture in an averagely lit room at night – likely when recording an indoor family event, for example. If the available light isn’t sufficient, there’s a small LED video light built in that has a range of a few metres.

The Slow Motion option produces much softer footage, lacking the detail available from the top non-slow-motion options, which is probably something to do with the frame interpolation. But motion is smooth nonetheless.

Be the first to review “HC-V770” Cancel reply