WHAT IS THE PANASONIC HC-W570?

At first glance, the Panasonic HC-W570 is a relatively low-end camcorder, but appearances can be deceiving. Although the core specifications are entry-level, the camera allies them with a number of features from higher-end models.

It incorporates a back-up camera for grabbing a second angle or narration selfie alongside the main video. It also offers more elaborate image stabilisation than I’ve come to expect at this price bracket. 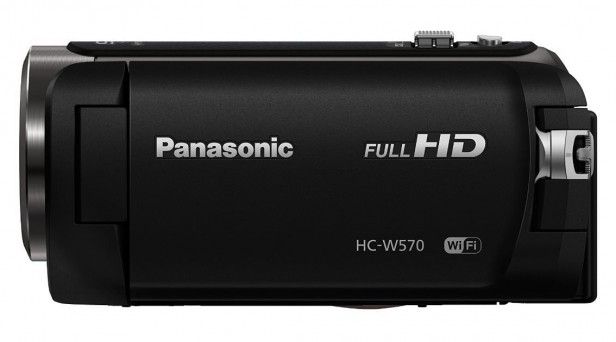 The lens is relatively mid-range, dropping down to a decent f/1.8 at full wide angle but rising to f/4.2 when zoomed in. The camera offers a considerable 62x zoom, and this can be boosted to an even more substantial 90x using the Intelligent Zoom option, which crops into the sensor. This means it doesn’t lose quite as much detail as a purely digital zoom.

A digital zoom is also available, but it provides a ridiculous 3,000x factor, and is best avoided. It’s also worth noting that the top optical zoom is reduced when various image stabilisation features are enabled.

Where most camcorders at this price level tend to rely on electronic image stabilisation, the HC-W570 boasts a higher-end optical system. Panasonic’s been leading in this space for some time, and it’s great to see this level of stabilisation available at this price.

The optical system is supplemented with digital assistance to make it even more powerful – hence the Hybrid name – allowing it to provide an Active mode to smooth handheld camerawork while walking or running.

The headline feature of the HC-W570 is the secondary lens, which sits on the edge of the LCD screen on a rotating mount. This means you can point it at yourself, or use it to get another angle on the action.

The sensor is similar to the main one: 1/5.8in in diagonal and sporting 2 megapixels, again with a backside-illuminated format. The lens is a fixed-focus f/2.8 one, which would equate to 30.6mm on a 35mm camera – so relatively wide angle. 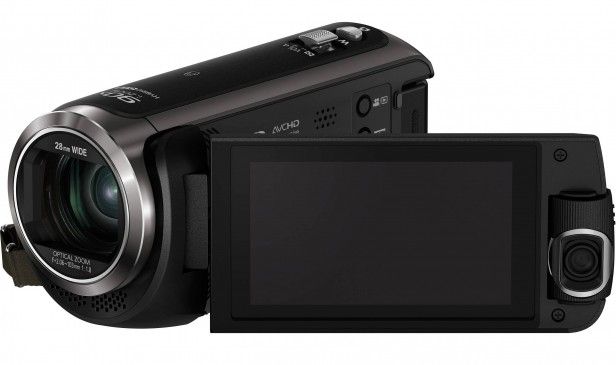 By default, the Twin Lens faces into the body of the LCD panel, which turns it off. But once rotated out of this position, the secondary window appears on-screen and you can also adjust the lens tilt using a dial on the side. Without further settings, you can begin recording and the video will be captured with the secondary window embedded.

There are menu controls for the aspect ratio and location of this window, but the only let you pick which corner it is in. There are also separate controls for white balance and exposure bias. However, these aren’t the full range of controls available for the main lens.

I was pleased to see that there’s now a Backup for Twin Camera function, which records both the picture-in-picture footage and just the footage from the main lens in two separate files. This means it’s possible to take off the secondary lens footage if you want.

You could, for example, use the Twin Camera footage only when you’re actually narrating what’s going on, without constantly having to rotate the lens into the off position. The second stream isn’t available in 50p mode, however.

As a non-4K camcorder, the HC-W570 offers Full HD recording, both in AVCHD and MP4 formats.

However, I was disappointed to see that there’s no slow-motion capability. 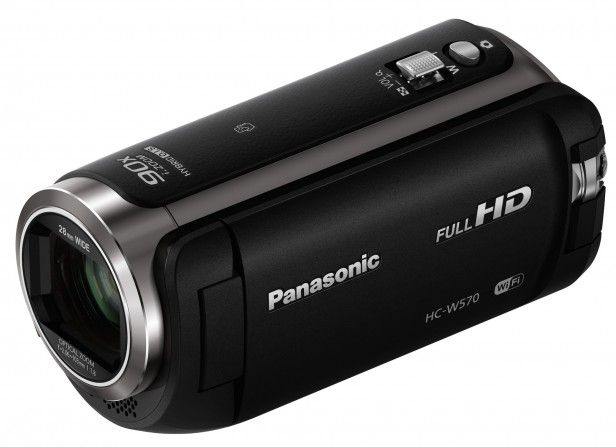 You do get a time-lapse option in the Creative Control shooting section, which includes the ability to create a quasi tilt-shift Miniature Effect, as well as a Silent Movie, with the latter providing a black-and-white image with high contrast. You can’t use these with any of the other manual settings – of which there are many.

This is one of the aspects I’ve always loved about Panasonic camcorders. Detailed manual controls are available in even the cheapest members of its range.

In Auto mode, only backlight compensation is available. But switch to Intelligent Auto and colour and exposure controls are enabled. Both modes are assisted by automatic detection of shooting conditions, which then enables appropriate scene modes.

You can also select one of 11 different scene modes manually. However, the full manual mode gives you complete control over focus, white balance, shutter and iris.

Manual focusing is a little difficult to control with the touchscreen LCD, but the remaining options work well. There are two outdoor and two indoor white-balance presets, plus fully manual and auto mode.

Wi-Fi control is available too. As well as providing remote-control recording, you can use the smartphone app to provide an alternative Twin Camera function. There’s a baby monitor option that lets you link the device to your home Wi-Fi and remotely access the camera from outside – or play the recorded footage on a DLNA-compatible device such as a smart TV. It’s also possible to stream video live via Ustream.

The HC-W570’s small CMOS sensor definitely marks it out as a budget camcorder, but image quality is still pretty good. The detail and colour fidelity in bright lighting is commendable, and the optical image stabilisation works superbly. Regular, mild up-and-down vibrations are almost entirely smoothed out.

Performance in low light is surprisingly decent too, considering the small sensor. You probably won’t be using this camera to record film noir, but it copes perfectly well with relatively gloomy indoor conditions. There isn’t much sign of grain, and the picture remains bright, making it able to capture the vast majority of family events that you’re likely to want to record. 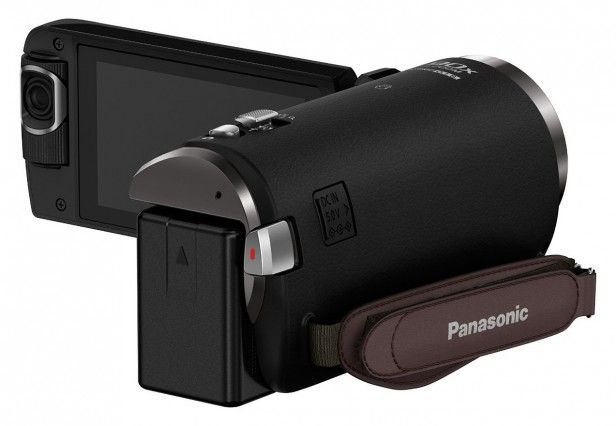 Be the first to review “HC-W570” Cancel reply